Past Memorial Photos by Year 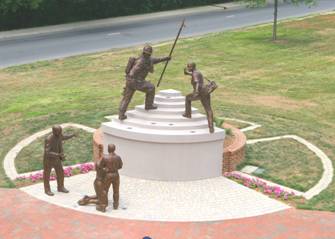 The sun rose brightly over the scene on Sunday June 7th as firefighters and other emergency service personnel, over two hundred in all, gathered on Calvert Street at the site of the Maryland State Fire-Rescue Memorial to pay tribute to six Maryland emergency services personnel who gave their lives in service while protecting those whom they had sworn an oath to protect.

Dedicated in 2005, The Maryland Fire-Rescue Memorial Park is a commemorative park for those who have died in the line of duty. The bronze plaques etched with the names of over 400 individuals gives personal recognition and a permanent tribute to those emergency responders who are lost to their family and community. The sculpture in the park allows reflection on the actions taken by our firefighters and rescue personnel when they are needed by the community. The artist responsible for designing this fitting memorial is Mr. Rodney Carroll of Baltimore, Maryland.

The keynote speaker for this year was Fire Chief Darryl Jones of the Pittsburgh (PA) Bureau of Fire. Although not from Maryland, Chief Jones has participated in every memorial service since its inception riding into town on his signature Harley Davidson motorcycle, standing quietly in the background. This year, Chief Jones offered words of comfort and solace to the families of the fallen heroes and called upon those present to continue the work of such fine individuals as a commitment to them. He spoke eloquently about the “thin line” that separates those who are imperiled from the danger that is ever present. He reminded everyone that it is emergency service personnel who stand on that thin line and ensure the safety of Marylanders on a daily basis – without fail.

The service recognized six individuals from across the State who did not return home to their families at the end of their tour but instead gave their lives doing what they loved to do.

Emergency Medical Technician Sergeant Tonya Michelle Mallard - Waldorf Volunteer Fire Department -- On September 28, 2008, at the age of 38 and with 4 years of service, EMT-Sgt. Mallard was killed when MSP Trooper 2 crashed after encountering severe weather conditions. Trooper 2 was on a life-saving mission transporting two young women from a crash scene to Prince George’s Trauma Center. EMT Mallard boarded the helicopter to provide patient care during transport. EMT – Sgt. Mallard is survived by her husband Ken and two sons Kenneth and Julian.

Helicopter Pilot/Retired Corporal Stephen H. Bunker, MSP Aviation Command, Washington Section -- On September 28, 2008, at the age of 59 and with 34 years of service, Pilot Bunker was killed on that same mission when Medevac Trooper 2 crashed while transporting accident victims. Bunker, who had advanced aviation certifications, retired in 1998 following a 26-year career with Maryland State Police. He remained as a civilian pilot with MSP until his death. Pilot Bunker is survived by his wife Sherry and three children Stacie, Scott and Shelby.

Trooper First Class Mickey C. Lippy, MSP Aviation Command, Washington Section – On September 28, 2008, at the age of 34, and with 4 years of service, Trooper First Class Lippy was also killed when Medevac Trooper 2 went down. Trooper Lippy was based at Andrews Air Force Base – prior to that he was assigned to the Glen Burnie and Westminster Barracks. Prior to joining the Maryland State Police, which was a life long dream, Mickey worked as a Firefighter/Paramedic for Anne Arundel County Fire Department assigned to Station 18, Marley. He was employed part-time as an Engineer/Paramedic with the Gamber Fire Company and was an active member with the Owings Mills Volunteer Fire Company. Trooper First Class Lippy is survived by his wife Christine and infant daughter Madison.

Paramedic Firefighter Brian D. Neville, Baltimore County Fire Department. On October 15, 2008, at the age of 32 and with eight years of service, Paramedic Firefighter Neville died while working at the Texas Fire Station in Baltimore County. Normally assigned to theHillendale Fire Station,, Neville was filling in as an EMS District Supervisor at the Texas Station where the district supervisor’s office is located. Neville had previously been assigned to the Westview, Woodlawn and Catonsville stations and was considered a role model for younger paramedics. He is survived by his wife Katie and three young children Carson, Cameron and Carleigh.

Firefighter Thomas “TR” Rice, Baltimore County Fire Department, On January 21, 2009 at the age of 44 and with 28 years of service, Firefighter Rice succumbed to pancreatic cancer. The son of a Baltimore firefighter, "TR," who served the county both as a volunteer and a career firefighter, began his career at the Essex station in 1988. He was subsequently assigned to Fullerton, Hillendale, Parkville and finally Station No. 1 inTowson, where he worked for 11 years. He loved driving fire trucks, especially the hook and ladder assigned to Station 1, and he taught others the skill. Firefighter Rice is survived by his wife Karen and children Rebecca and Thomas, Jr.

Fire Chief Charles (Buck) Clough, Sudlersville Volunteer Fire Company. On April 15, 2009 at the age of 41, and with 26 years of service, Chief Clough jumped into his pickup truck and headed towards town in a driving rain storm. He was responding to an alarm for a small appliance fire in a home on Main Street and, while enroute, was involved in a single vehicle collision and pronounced dead at the scene. Chief Clough was a Life Member of Sudlersville and held numerous offices during his 26 volunteer years. He is survived by his wife Sandy and sons Shane and Chase.

The memorial park has undergone a series of improvements in a capital project just completed. A fountain has been added to the site as well as sitting areas and park benches that encourage visitors to stop and sit, reflecting on the service of the men and women whose names appear on the wall. The dream of Chief Don Mooney (dec.) of the Landsdowne Volunteer Fire Company, the land for the park was donated by the State of Maryland and sits at the entrance to the City of Annapolis at the convergence of Rowe Blvd, Calvert Street, and Bladen Street. Under Chief Mooney’s leadership, a group of dedicated individuals have continued his work by ensuring a permanent home for the fallen heroes of Maryland. In honor of Chief Mooney, a tree has been planted at the site with a memorial plaque. It reads:
“So Others May Live”

This tree stands in tribute to

Just as this tree serves as a sentinel over hallowed ground, so, too, does the memory of Chief Mooney’s lifetime of contributions to the Maryland Fire and Rescue services.

Chief Mooney led the effort to create a home for our fallen comrades and in its creation, made a home for us all. His legacy shall live on at this Memorial Park and his presence will be felt by those who visit seeking comfort and solace.

He is here now – watching over our fallen heroes.
June 2009

The memorial service is held annually on the first Sunday in June. The service is open to all and members of the public are encouraged to attend. For more information visit the website for the Foundation at www.mdfirerescuehero.org.